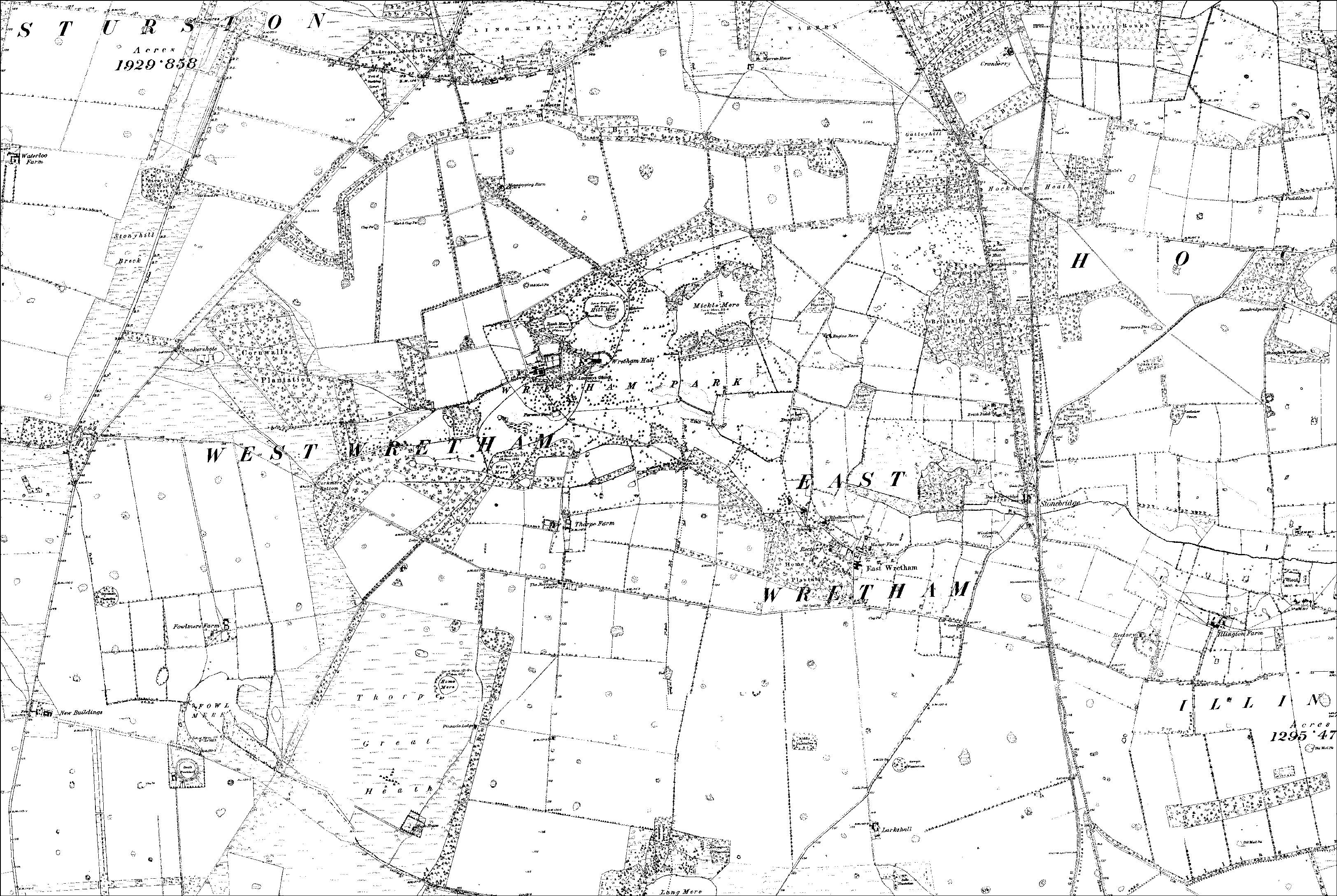 The Wretham Estate consists of a number of smaller hamlets namely West Wretham, East or Great Wretham, Wretham Thorpe and Stonebridge. Each has a history in its own right and though East Wretham that is the most well known today, each of the others has played its part in shaping the Wretham story.

The manors of East and West Wretham have a complex history, with manorial rights held at various times by institutions including the Abbey of Bec in northern France, King’s College Cambridge and Eton College.

Eton College introduced a custom where once the tenants had completed the harvest a ram was set loose on an acre of barley. If a tenant caught the ram it was theirs to keep. Failure to catch the ram meant the Lord had claim. This custom continued at Eton in the playing fields finally being superseded by a ram pasty being served at college election time. The ram is remembered as part of the East Wretham village sign.

Eton holds a number of indentures that show the manor of East Wretham was leased to a number of different people, including William Jermyn (1597-98), William Webb (from 1618), John Duffield (in 1622) and to Elizabeth Duffield in 1635. Elizabeth married Sir William Gawdy from West Harling and their son Sir John Gawdy took the lease on.

A 1741 map, formerly held by Eton College but now in the Norfolk Record Office shows the lands of East Wretham, whilst a sketch map held at Kings College, Cambridge shows lands in West Wretham leased by Mr Pretyman. It appears that Pretyman’s farmhouse was either enlarged or rebuilt to become the first Wretham Hall (1790-1906).

William Colhoun purchased part of the manor of West Wretham in 1788 and the Eton College lands at East Wretham were subsequently leased to him. It was he who had developed the hall and Fadens map of 1797 shows the hall as “New House”. It should be noted that on the same map the Manor is referred to as the hall, which confuses matters somewhat.

A document produced in 1793 shows that William Colhoun owned all the houses in West Wretham which he susbsequently pulled down, rehousing the parishioners in East Wretham. At this point Eton College were upset that Colhoun had completely altered the face of the country by diverting roads and planting trees without permission. In 1801 it was reported that Kings College got equally upset by all the changes. Worse was to follow as Colhoun was reported to have ignored all the letters sent to him by both colleges and in 1802 an attorney took possession of the manor, the heavily indebted Colhoun having fled to South Africa. Both colleges met in November 1802 putting down boundary stones to redefine their lands.

The shooting by 1802 had become very famous particularly for the partridge drives and Lord Paget (who would become Marquis of Anglesey) paid 800 guineas a year for the sporting rights.

In 1825 via an Act Of Parliament, Mr Wyrley Birch made an agreement with Eton and King’s, to swap lands he owned at Shipdham and East Bradenham for their lands at Wretham, uniting the lands for the first time. The hall was, according to a relative, not a pretty house but was very large, having a basement and third floor. The latter housed many of the family and their servants and the gardens were reported to have been quite magnificent, with rock gardens, rose gardens and a walled kitchen garden, with the hall set in a stately wooded park. The Wretham Estate (all 6,400 acres) was now a six -day a week shoot for the entire shooting season and was designed very much around this sport. The meres had decoys so that duck shooting could be enjoyed alongside the partridge and pheasants.

In 1879 the estate was sold to William Morris who was to become Sheriff Of Norfolk. He died in 1890 and his nephew Sydney Morris inherited. He laid out an 18 hole golf course across the park and let the sporting rights to Baron Hirsch, amongst whose shooting guests included King Edward VII and the then Prince of Wales. In 1904 Country Life featured the estate as one of the foremost shooting estates in England.

In December 1906 a fire broke out and despite the valiant efforts of the Thetford Fire Brigade, Wretham Hall (other than its West end) was almost completely destroyed. Shortly after the fire the Manor House was extended and the Morris family moved in until selling their lands in 1920. The estate was purchased by the Noble family who rebuilt the hall in 1914. The estate changed hands again in 1926 and in 1939 3,000 acres were sold to the Forestry Commission.

During WW2 the new hall was used by British and American servicemen and the land requisitioned by the government, leaving a trail of destruction in their wake. The hall was demolished in 1948, only 34 years after its rebuilding.

Where to find out more